The U.S. Green Building Council (USGBC) announced the Top 10 Countries for LEED, a list that highlights countries outside the United States that are making significant strides in sustainable building design, construction and market transformation. These countries represent the ever-growing international demand for LEED-certified green buildings. This year, China moved from second to first on the list as the largest user of LEED, with 34.62 million gross square meters (GSM) of certified LEED space. Canada, India, Brazil and the Republic of Korea rounded out the top five countries on the list, respectively.

“By recognizing these leading countries, we are showcasing the exponential growth of LEED in the global marketplace and an international commitment to the creation of a sustainable built environment,” said Mahesh Ramanujam, president and CEO, USGBC. “As we pursue a worldwide effort to mitigate climate change, LEED and the green building industry have created a path forward for market transformation while changing the way we think about how buildings, communities and cities are planned, constructed, maintained and operated.”

Global green building is expected to double every three years, according to a Dodge Data & Analytics World Green Building Trends 2016 SmartMarket Report, to which USGBC was a contributing partner. Conducted in 70 countries, the report found that emerging economies like China, India and Brazil will be engines of green growth, with development varying from twofold to sixfold over current green building levels. Increased consumer demand has also pushed the world’s green building market to a trillion-dollar industry, a surge that has led to a corresponding increase in the scope and size of the green building materials market, which is expected to reach $234 billion by 2019.

LEED, or Leadership in Energy and Environmental Design, is the world’s most widely used green building rating system. The analysis used to develop the list ranks countries in terms of cumulative LEED-certified GSM space as of December 2016. LEED-certified spaces use fewer energy and water resources; save money for families, businesses and taxpayers; reduce carbon emissions; and prioritize environmental and human health.

The full ranking is as follows: 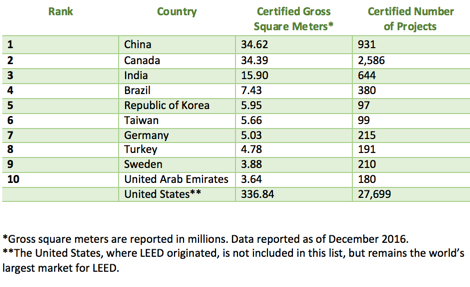 Currently, there are more than 82,000 commercial projects participating in LEED, totaling more than 1.4 billion GSM of space worldwide. An additional 112,000 residential units have been certified under LEED Homes. An estimated 170,000 GSM of space achieves LEED certification every day in more than 162 countries and territories across the globe.

As buildings currently account for an estimated one-third of global emissions, green buildings are one of the most cost-effective solutions to climate change because they generate significant environmental, economic and societal benefits. Last year, USGBC joined 25 other green building councils from around the world to commit to scaling the use of LEED over the next five years to reduce greenhouse gas emissions and ensure that the building and construction industry plays its part in limiting global warming. USGBC is working toward a net zero carbon designation to recognize leaders in the building sector, and to drive reductions in the carbon footprint across the buildings sector as is necessary for successful implementation of the Paris Agreement. All of the countries on this list, with the exception of Taiwan, have signed the historical Paris Agreement.