“The best way to predict the future is to design it.”

As recent hurricanes ravaged the East Coast and killer fires raged out of control in California, the conver- sation around climate warming and what to do about it has taken on a tone of greater gravitas. For design professionals in the built environment — a major source of car- bon pollution — solutions increasingly cen- ter around resilient design, the next chal- lenge in eco-responsible design.

“What we’ve seen in the past couple of years is that people are really waking up to the fact that not only is climate change real, it is happening already,” said archi- tect Mike Cavanaugh, vice president and sustainability leader, CannonDesign, an integrated global design firm.

Cavanaugh is right, according to the Yale Program on Climate Change: 62% of Americans polled in 2018 said they believe that climate change has a human cause, up from 47% in 2013. There was also a reported decline in Americans who are classified in the “dismissive” or “doubtful” camps.

Now, people are faced with the idea that “we need to rethink where we build,” Cavanaugh said. For example, building sites that are suitable in 2019 are not going to be suitable in the 2060s and beyond, and there are billions of square feet of already built construction that are in the wrong places. “We are just waking up to the fact that we need to be thinking about this,” he said. “Look at Houston, Texas; most of it is built in a flood zone. And we need to start thinking about it when we are doing commercial renovations.” 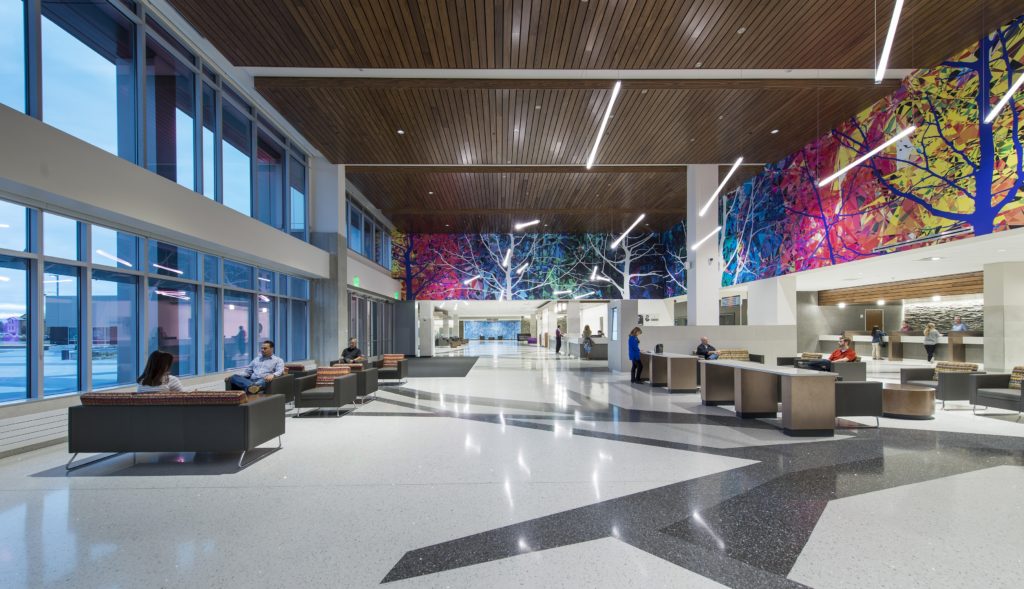 What exactly is resilient design?

Josh Human, disaster management and resilience practice leader at global engineering and design firm Stantec, told GO as the idea of sustainability is grounded in endurance and preservation, resilient design applies to adaptability, innovation and the safety of building occupants in the face of the growing and dangerous implications of climate change. “We help our clients and communities think about how to do things better from a resiliency standpoint and respond to constant change especially as it relates to climate change,” he noted.

In order to continue and even begin conversations around resilient design, there is a need for understanding the future implications of climate change. One thing that forward-thinking firms such as CanonDesign, Stantec and DLR Group are doing is using data and computer simulations to assess threats and project weather patterns well into the future in an effort to better understand how buildings perform during peak heat and cold periods and extended power outages. Prolonged periods of extreme heat can have serious impacts not only for building occupants but for the actual structure. For example, high temperatures can affect building adhesives, including those used for flooring.

“Because climate change is fairly new to us, we are all trying to understand what the future is going to hold,” said Amir Rezaei, chief high-performance building analyst, CannonDesign. “We have very good historic data from temperature, rain and wind, but when we talk about 2050 and 2060 and 2100, there are models and simulations out there that can predict what the number of cold and hot days will be, what that is going to look like. The key for us is to get ahead of those questions.”

Brett Farbstein, high performance building consultant who oversees CannonDesign’s commissioning services, added, “Engineers typically design using historic tables of data, and you now need to start using potential trends of what might happen as opposed to history. Codes do eventually catch up but they are not mov- ing at a pace to deal with the changes in cli- mate that we are seeing now.” 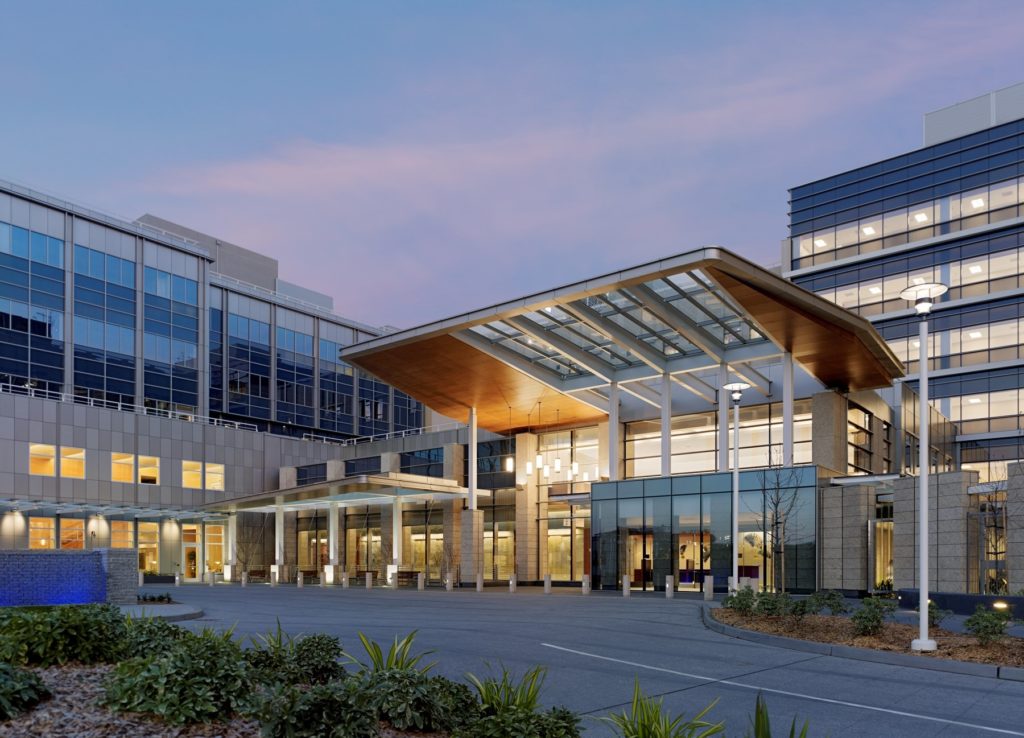 Built near the San Andreas fault line, Stantec architects designed the Mills-Peninsula hospital in Burlingame, Calif. so it could remain operational after a major earthquake.

With the awareness of climate change and its impact on commercial building on the rise, predicted solutions to potential resiliency needs are starting to take shape. To begin with, the rising costs of energy and construction material and the threat of greater power outages will most likely lead to daylight as the primary design lighting source for buildings in a post-carbon world. That means narrower floor plates, more internal courtyards and atrium spaces and perhaps a more generic design of buildings, allowing for greater flexibility of use. It also means assessing which buildings should be abandoned or retrofitted, what the threats are to a building site and the likelihood of future threats such as increased inland or coastal flooding.

For interiors, and flooring more specifically, some note that there will be an increased focus on durability and robust- ness in anticipation of significant weather events. Flooring material choices, particularly on the first floor, are paramount. However, questions still remain: Should specifiers go with a super-durable choice like polished concrete or easily replace- able materials instead? And, what about the content of those materials from a sus- tainability standpoint? Is there a take-back program? Is it made of recycled content?

Highly durable and water-resistant flooring products such as terrazzo and tile can be good choices in resilient design. Terrazzo — perfected in the floating city of Venice, Italy where it has been widely used for centuries — is by its very nature a recycled product that is both beautiful and low maintenance. New epoxy terrazzos made with advanced polymers widen the selection of products available today as well as their applications.

Architect Premnath Sundharam, global sustainability leader for integrated international design firm DLR Group and a widely recognized thought leader on sustainability and high-performance building design, added that resilient architecture and design will emphasize an enhanced connection to health and wellbeing, which is already a growing trend today. As people in health and design fields collaborate to create buildings and communities that can withstand disasters, biophilic design principles will play a vital role in the emotional and psychological recovery from climate events.

“Where I come from in India water is part of the design of a building, but that is not the case in the U.S. where it is contained within specific areas,” he said. “That is going to change.” 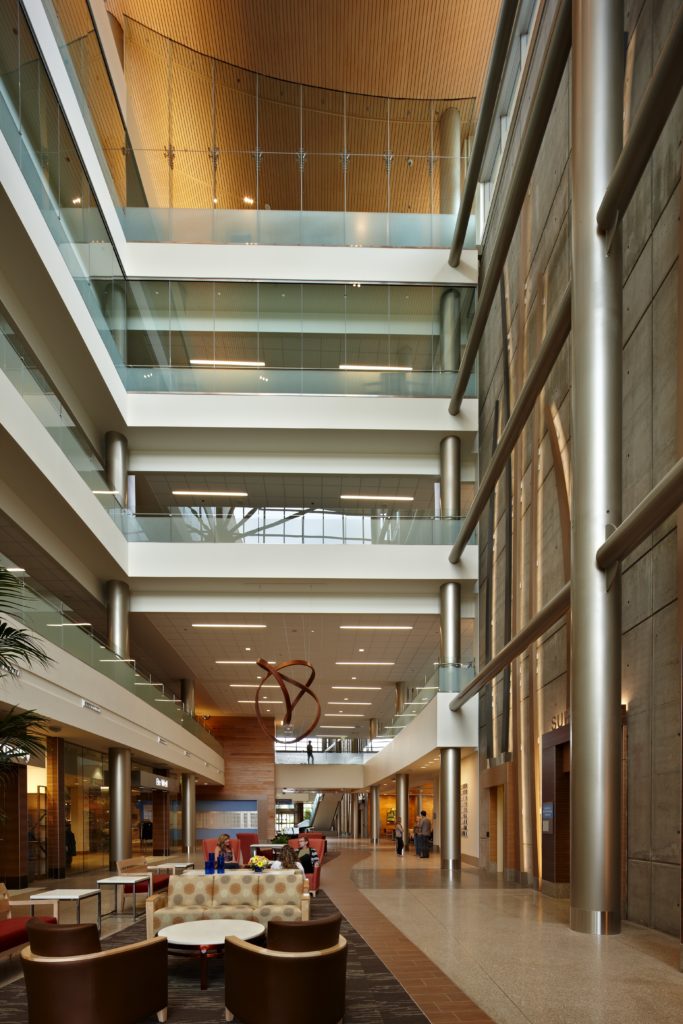 Stantec architects at the Swedish Issaquah Medical Center near Seattle designed the facility to capture full sun on three sides and daylight in the basement.

“From an interiors perspective, there is a lot we can be thinking about in terms of making a building as sustainable and resilient as possible for the cost,” said DLR Group principal Audrey Koehn. “The cost and the impact of it on our client is also something that is very relevant. I don’t know if it’s as on the forefront as the bot- tom line, but I think it will be as things continue to evolve and events become more frequent.”

To see this story in print: